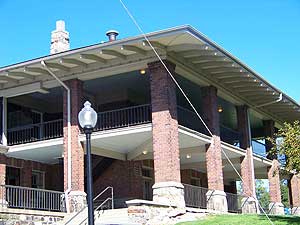 Our mission is to enrich the quality of life for our community through parks, recreation and cultural arts.

Our vision is to provide for now and future generations a sense of community, preserved green spaces, diverse programs, excellent customer service and life changing experiences.

Bloomington Parks and Recreation Department is located in Central Illinois

The Bloomington Parks, Recreation & Cultural Arts Department is located in Central Illinois and serves a community over 75,000. The Department is composed of five divisions working jointly to accomplish its mission. These divisions are Parks, Recreation, Golf, the Miller Park Zoo, and the Bloomington Center for the Performing Arts. The Department maintains over 1100 acres of land including 38 park sites, 3 golf courses, 2 aquatic facilities, and an ice rink.

Parks and Recreation officially became a department of the City of Bloomington as the result of an ordinance which passed on April 30, 1968. Mayor Bob McGraw was instrumental in setting up the new department. John H. Woodworth, Jr. was appointed director and Jasper Simmons, Jr. was hired as the part-time Recreation Coordinator. Grover Katthoefer, the Park Superintendent in the Public Service Department, was reassigned to the new department. Four divisions were set up: Supervised Recreation, Parks, Highland Golf Course, and Swimming Pools. The 1970s and ‘80s saw new growth in parkland acres and development of new parks. The first school/park site, Stevenson School, opened in the ‘70s. O’Neil Pool, Bloomington’s “first swimming pool built from scratch” opened May 30, 1975. The 1980s (and early ‘90s) the department hosted 3 National Fastpitch Softball Tournaments, held mostly at O’Neil Park. In a joint venture with the Town of Normal, 1988 saw the opening and dedication of the Constitution Trail. This ever-expanding linear trail system is arguably the most heavily used “park facility” in the Twin Cities and is now approaching 30 miles in length.

In March 2009, the Parks and Recreation Department merged with the City's Cultural District Department to form a new department to be known as the Parks, Recreation and Cultural Arts Department. The former Cultural District consisted of a 1200 seat Center for the Performing Arts, complete with an open green space utilized for an outdoor summer concert series and an office building that is in the renovation planning stages to become the Creativity Center. The future Creativity Center will be a facility to serve the needs of both internal departmental programs and many external community arts and cultural groups.

Director of Parks and Recreation