The City of Bloomington Parks, Recreation, & Cultural Arts Department has received an Illinois Urban Forestry Restoration Grant through the Department of Agriculture to remove and replace 96 Ash trees along the Bloomington portions of Constitution Trail.

These funds will provide a unique opportunity to reforest the park after the impending loss of Ash Trees caused by the Emerald Ash Borer and will also increase the diversity of tree species throughout the park.

96 trees were removed and an equal number were replanted in the spring of 2012. Trees with a diameter of 8" or more will be utilized for lumber. 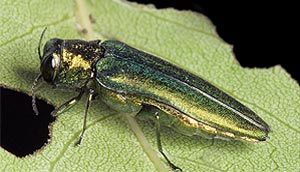 The Emerald Ash Borer (EAB) is a small green metallic beetle approximately 1/2 inch long. The EAB was first discovered in Canada in 2002 and since has done extensive damage to ash populations in Michigan, Indiana, Ohio and now Illinois. The EAB poses no threat to animal or human health. Over 30 million ash trees in the Midwest have been lost to EAB. EAB attacks only trees in the genus fraxinus. These are the white, green, blue and black ash. The majority of ash trees in Bloomington are green or white ash. For more information on EAB in Illinois go to www.illinoiseab.com.

In July of 2008 the State of Illinois Department of Agriculture (IDOA) notified the City of Bloomington that 2 adult EAB beetles had been found in traps on the southwest side of town. Through multiple ash inventories and proper management the City of Bloomington has safely reduced the Ash population on City Property approximately 4100 trees in 2008 to 500 in 2017. 220 of these are specimen ash currently being treated, with 80% success rate. All ash removed have been replaced with alternate species, with an overall community tree diversity goal of no one species over 7% of the urban forest. If there is a positive from the epidemic it is that EAB has provided the industry an opportunity to diversify tree species in our urban forest.

Citizens can take several steps to help slow the spread of the EAB throughout the county:

There are now multiple treatments for EAB available. When considering chemical treatment one should balance the costs of annual treatments over time versus replacement and removal costs. Rotating treatment types has shown some success. Treated ash trees may still need to be removed in the future. To help in identification of your trees consult www.plants.usda.gov.

Any ash tree removed will be replanted with an alternate species provide ample space is available. If you would like to report an infested ash tree on public property, please call 434-2260. The City of Bloomington has received and executed 2 grants from the Metropolitan Mayors Caucus for ash tree removal and replacement at White Oak Park and Constitution Trail.